Magical Scraps Galore is having a 50% off sale storewide! If you want an even better deal, check the two special "build your own" grab bags at my Scraps N Pieces and GingerScraps shops to help you save up to 80%!! And check out below the awesome activities at Scraps N Pieces and GingerScraps! 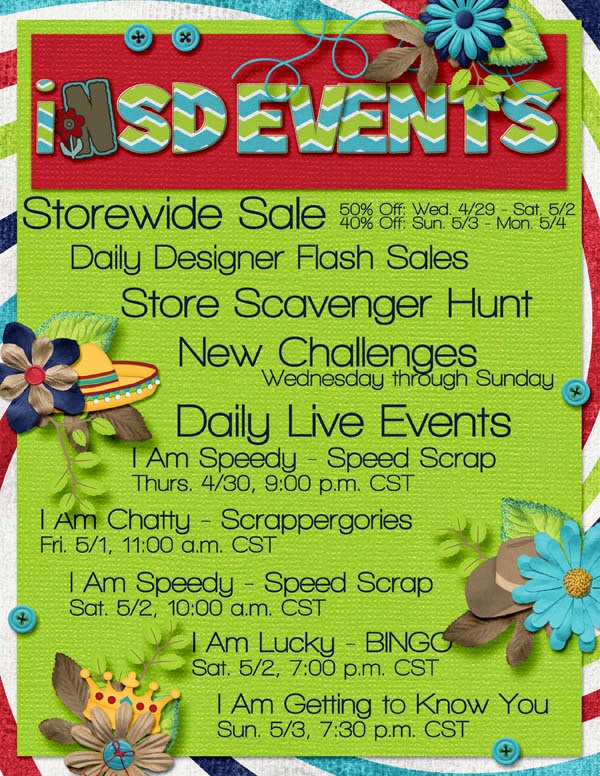 SPEED SCRAP!!
Mark your calendar and join Marina for a Speed Scrap on May 1st at 10:00 am EST at the GingerScraps chat room. She will be giving away random coupons and the participation prize is her mini kit "Cherish This Moment":

FACEBOOK HOP!
Don't forget to visit Magical Scraps Galore's Facebook Fan Page and join the GingerScraps FACEBOOK HOP!
This event starts May 1st  at 10 am EST and will be available until March 7th midnight.
This will be Marina's contribution: 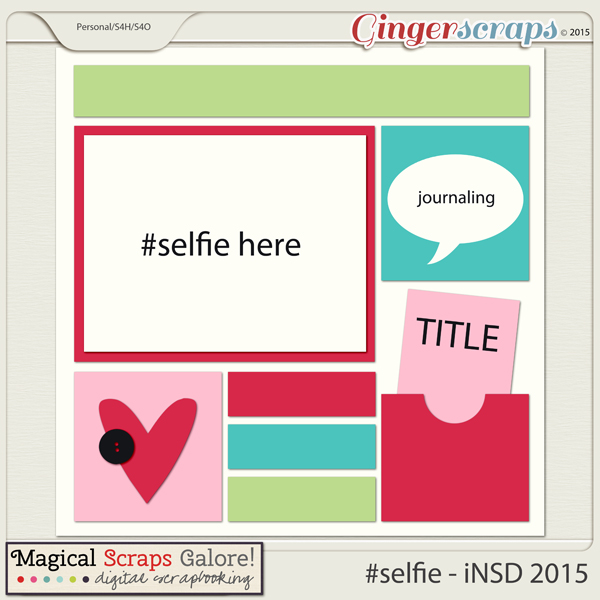 Thank you and have a great day!

Today from Magical Scraps Galore.. and a freebie!

Capture the joy of everyday life with this adorable collection by Magical Scraps Galore, Today.
With its light and fresh colors, this versatile kit will make today memories look beautiful.
Today includes20 textured papers (12 patterns and 8 solids), 1 alpha, and42 elements, and is available at Scraps N Pieces and GingerScraps at 30% off through April 30th. {This collection was part of the March FWP at Scraps N Pieces, so check your stash before buying.}

�
Some inspiration from the Magical Scraps Galore creative team:
�

�
CT Karrie has created this fantastic freebie, just for you!
You can find it HERE! And that's all for today! Thank you and have a great day!

Dreams come true... It's pickle barrel time from Keystone Scraps & how to get a freebie!

Here's what I did with this amazing kit...

Here’s a little goodie to get you started on a enchanting  page!  I have made a little freebie from the Dreams Come True packs!

Click on the preview to go to Keystone Scraps Blog to pick it up!

What else is a blog for except to vent, to rant, to share. So today Im using this as kinda my journal to get some stuff off my chest.

There is this sweet guy that used to come in and send money to his kids in kenya. He was born and raised there . The other day I was working in self checkout, and he needed help.
He started talking to me about stuff. at the end he said thanks for listening to me sometimes
thats all people really need is to talk to someone and get things off there chest..
He was definately right.
Sooo...

As some of you that have kept up with my blog know, I have had cancer.
In august of 2012 I found out I had cervical cancer. In October I had it frozen.
In March of 2013 I found out I then had Uterine cancer, that was frozen in October almost a year to the date.
I was doing fine until my 6 month check and I found out that it was back.
After a looong road I was able to have my cancer frozen in September of 2014 .
My 6 week check came and more than 3 weeks later I finally got the good news that my cancer was still gone.. All clear. I was estatic!
Until...
Thursday. The chemo that helped get rid of my cancer damaged my heart muscles and kidneys.
I have been taking pills and trying to get it under control. But it has been a downward battle.
Im constantly getting kidney infections, & Im soo tired all the time.
After an incident, I was made to go get a complete workup and tests done on Thursday.
I have been given lisinopril and coreg. I need to take these for the next couple of months, to see if any improvement is happening. if it's not. their next step is to put in a pacemaker.
This has freaked me out. When my cancer was froze last time I died on the operating table and
since then I have had nightmares about it.
I did not see any light or even know it happened, I just went out and remember waking up with my chest sore. But I have had nightmares about this since then, So the thought of going under is
terrifying to me. Not to mention that I have struggled with my body image forever and the pictures I have seen of a pacemaker is saddening to me.
I know that sounds superficial. I also know that  there are people that have lost their battles with cancer or are fighting it now, that are worse off than me.
Sometimes it makes me feel guilty for feeling the way I do, but I also think I did go
through all that stuff and I do have a right to feel this way sometimes.
It sometimes feels like it's never gonna get better. I made it through all the chemo and survived the cancer only to have this drawback.
I don't dwell on it, But I will admit to having myself a couple of pity parties, then I get over it and go on.
So thanks for letting me share, now to go get some tings done.

Reach for the stars... from Ldrag Designs


Im excited to share that I am now part of LDrag Designs Ct team! 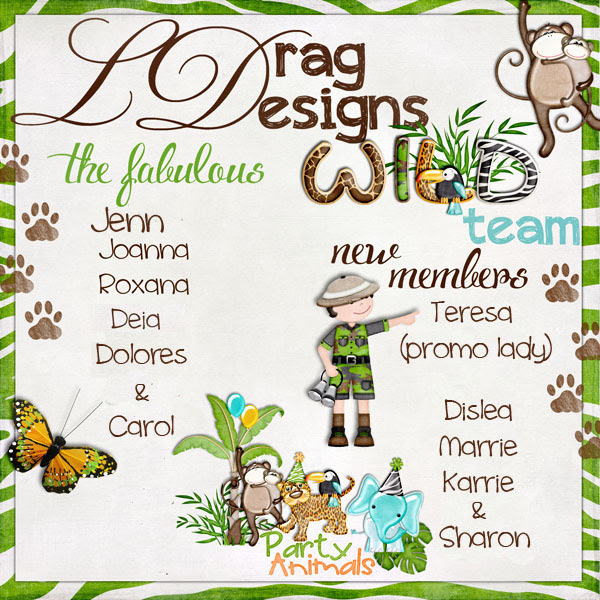 Since I was a little late for the release I did ask to make some layouts using her previous kit
Reach for the stars.
This kit is super cute 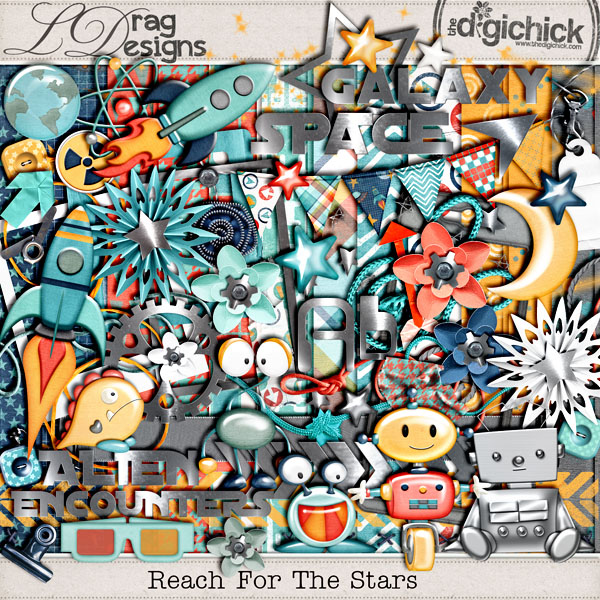 In A Galaxy far Away and so many more out of this world alien encounters is what this collection is all about!
This product contains
19 papers (7 solids & 12 patterns)
1 full metal alpha with uppercase, lowercase, numbers and some punctuation.
and 66 ellies.

there are also some coordinating products for this: 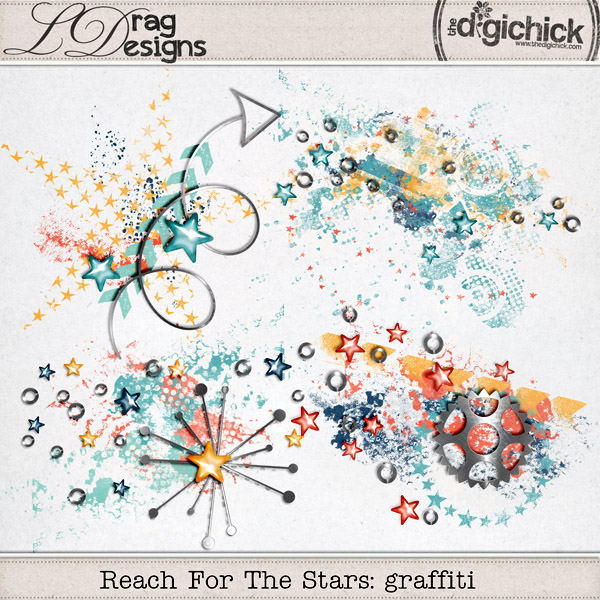 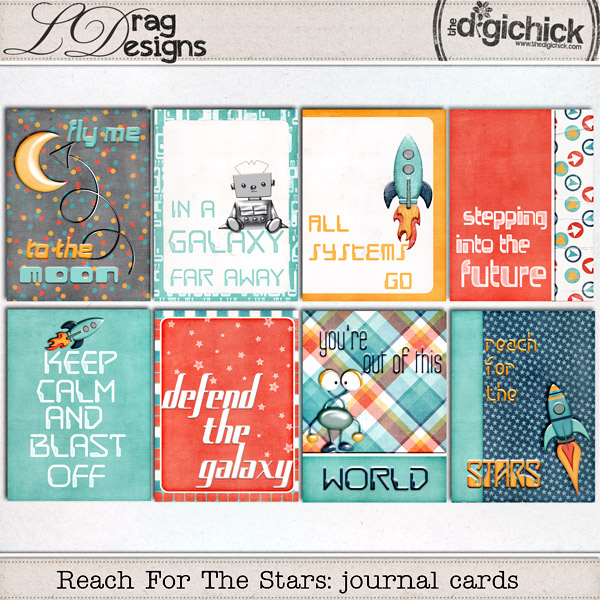 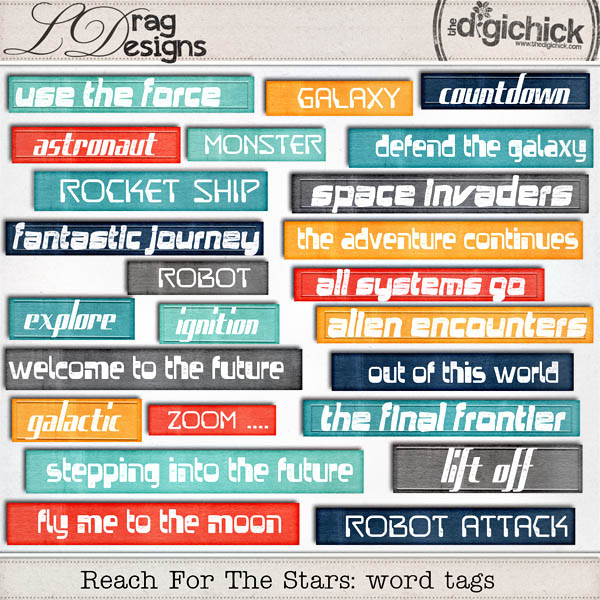 You can find these here:
Kit graffitti journal cards  word tags bundle
She also has a freebie on her blog to coordinate. Head over and check it out! 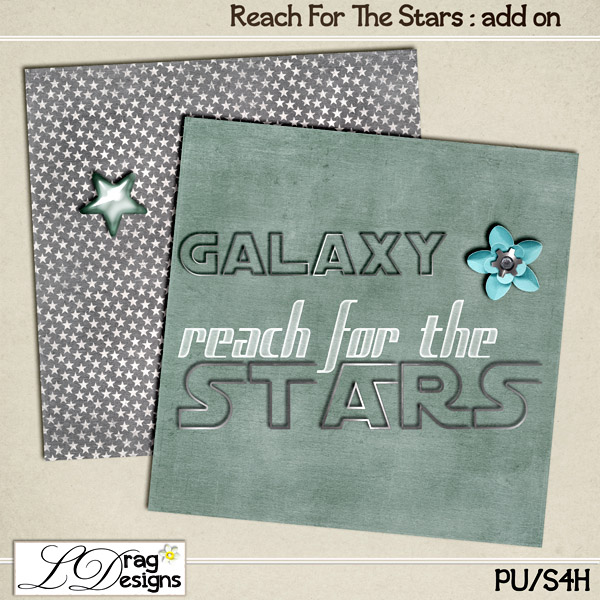 Super Heroes is a retro comic-book style kit that has come to your rescue in your scrapping needs!  With its halftone effects and bright colors, this fantastic collection is full of superhero stuff and comic-strip drawings, and is the perfect choice for adding some BANG and KA-BOOM to your layouts and projects.

You can get it at Scraps N Pieces and GingerScraps at 30% off through April 16th: 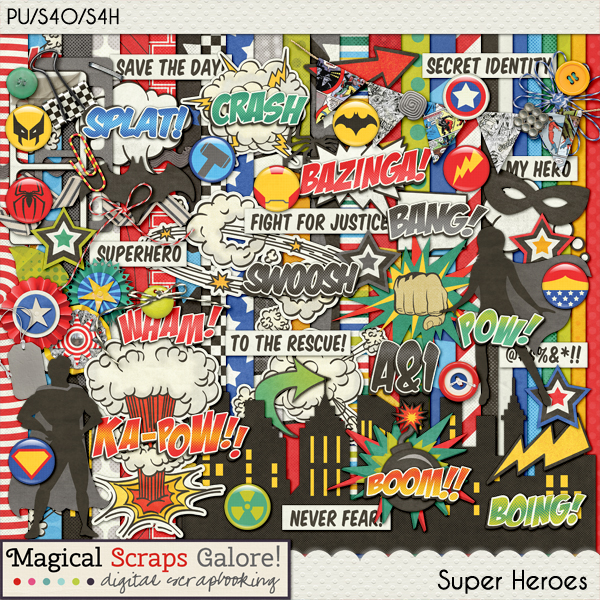 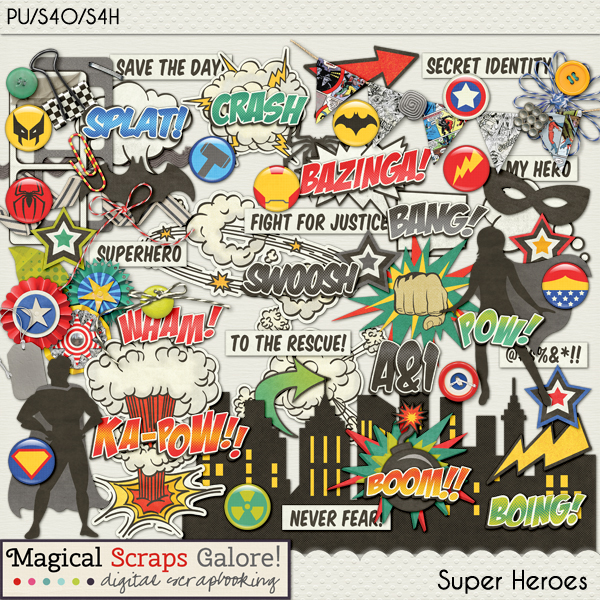 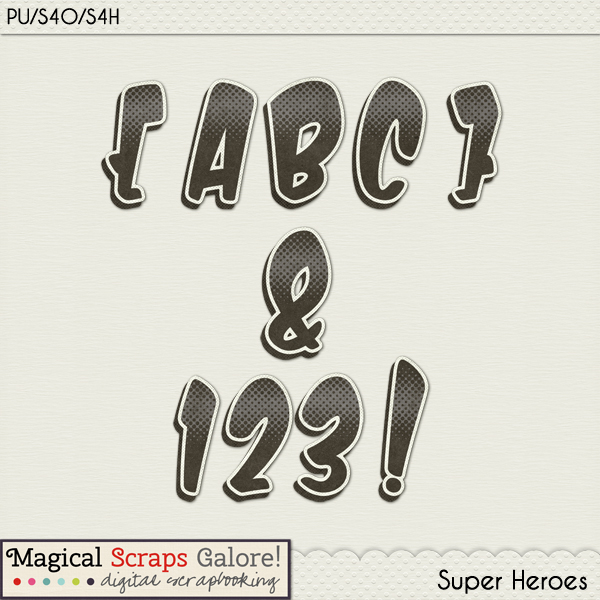 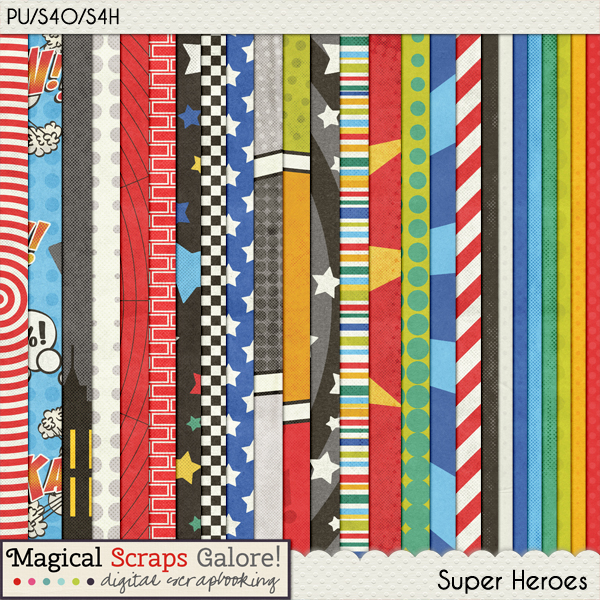 Some inspiration from the Magical Scraps Galore creative team: 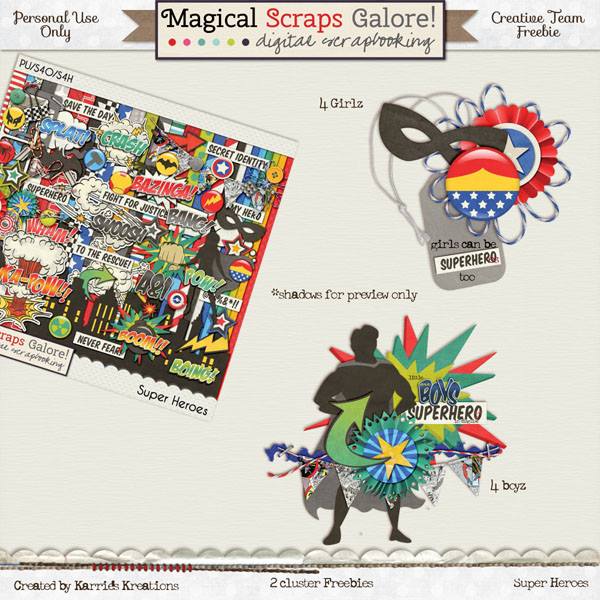 And you can also win this fabulous coordinating add-on that Marina created as a participation prize for challenge #277 at MouseScrappers, hosted by CT Annette: 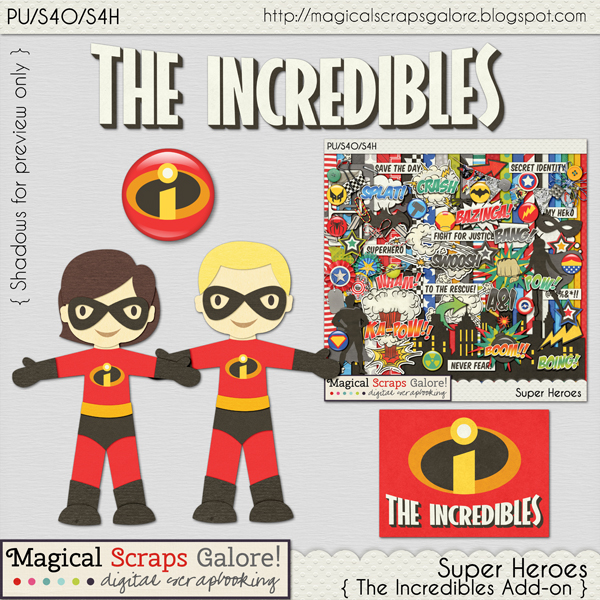 And that's all for today! Thanks for visiting and have a great day!
Happy Scrappin Ya'All!

Just Tink
Im a 39 yr old SAHM to 5 kids, ages 21,19,17,15,& a 8 yr old stepson.AND a grandma to 1! We live in arkansas. My 4 kids and I moved here to be close to my family. Im a disney crackhead. I love digital scrapbooking & Im an ametuer photographer. contact me: karrieskreations@gmail.com